In early 1941, almost a year before the United States entered World War II, the Army Air Corps invited leading aircraft companies to participate in a competition to produce a transcontinental heavy bomber that could reach targets at a very great distance from America, at least 6-7,000 kilometers. This was a rather ambitious challenge, as even the latest B-17 had a combat radius of ‘only’ 3,250 km.

In April 1941, a preliminary specification for the future aircraft was issued, and involved such giants as Douglas, Boeing, Northrop and Consolidated. According to the terms of the competition, the future aircraft was to be not only a bomber, but also a long-range photo reconnaissance aircraft and a tanker. At the end of October 1941, all participants in the competition submitted their projects, and the winner was a proposal from Consolidated, designated the B-36. The first aircraft was supposed to appear in 1944, but after the US entered the war, the main focus was on mass production of another important project from Consolidated - the famous B-24. Nevertheless, the company - soon to be renamed Convair - did not suspend work on the B-36, considering it very important and ambitious.

After the end of World War II, the government significantly reduced its military budget and many projects, including aviation ones, were canceled. However, this situation did not affect the B-36 at all - the geopolitical situation in the world was changing rapidly and the leading countries were already on the verge of a new, «cold» war. It was expected to feature a fundamentally new, nuclear weapon, first tested in August 1945 against Japan. Under these conditions, an aircraft able to deliver such a weapon over a long range acquired special significance.
The first flight of the new machine, which had already received the semi-official name Peacemaker, took place on August 8, 1946 - a year after the first use of nuclear weapons. It was a real giant, whose size still amazes the imagination: it had a wingspan of 70 meters and a fuselage length of 50 meters. The height of the aircraft exceeded 14 meters, and its maintenance would necessitate the building of special structures; ground crews would have to work on machines inside a five-storey building.

In terms of design, the B-36 was a real engineering breakthrough, as for the first time the latest lightweight magnesium alloys were used in large quantities, as well as glued components, and for the construction of individual units Convair had to use the largest equipment in aircraft history. Another special feature of the aircraft was the six pusher engines: that is, the propeller screws were located not in front of the wing as usual, but behind it to improve flight performance when using a thick laminar profile wing.

The fuselage had a circular cross-section with a diameter of 3.8 m, and inside it was even a special tunnel to allow crew members to move between the nose and the rear. The bomb bay was divided into four separate parts, which made it possible to deploy a variety of weapons. The aircraft was fitted with the latest high-power turbocharged engines, which developed a thrust of 3,000 horsepower each. As no escort fighter existed able to accompany a bomber with such a huge range, maximum attention was paid to protective weapons, which were to consist of 20 mm caliber remote-controlled guns.

Given the long flight time, the giant’s crew had to number as many as 15 people, six of whom were backups and were in the special rest room during flight. All this demonstrated that, although in construction terms it generally followed its predecessors, the B-36 was of a completely new generation of aircraft with much greater capabilities than ever before.

Testing of the prototype and pre-production airframes lasted until early 1948, and in the summer of the same year the first production B-36A was transferred to Eglin Air Force Base. A total of 22 of the B-36A version were built and they were intended primarily for converting crews onto the new type. Already during tests it was clear that the aircraft fully justified the estimated values, achieving a range of 10,000 km.

The next variant of the aircraft was the B-36B, which was actually the first model equipped for frontline operations in this large family of giants. A total of 73 of this type were built and they had a complete set of defensive weapons with 16 20 mm guns. The maximum combat payload of 39 tonnes allowed the aircraft to carry the entire range of ordnance, including the latest nuclear bombs.

In March 1949, during a training flight, a B-36B spent 44 hours in the air, dropping a 5-tonne bomb load 25 hours after takeoff. The Air Force now had every right to believe that they possessed a fundamentally new type of strategic weapon in this very long range aircraft. For its extraordinary qualities, the B-36 received the unofficial nickname «Uncle Sam’s Big» as a hint that from now on America was capable of inflicting a devastating blow on a potential adversary anywhere in the world.

As of the end of 1950, the U.S. Air Force had two units equipped with B-36Bs - the 7th and 11th Heavy Bomb Groups, based in the north and south of the country. At this time, the first serious conflict since World War II had already begun - the Korean War. The B-36Bs were constantly on the alert, but it was another type, the B-50, which was committed to the conflict, and the strategic giants would be used only in case of any escalation and the possible official entry into the war by both the United States and the Soviet Union.

Their role, as before, was to constantly patrol the territory in the neutral zone along the northern borders of the USSR. Subsequently, the B-36Bs were converted to the new B-36D standard, and their service in a new capacity lasted for the next 10 years until the appearance of a new generation bomber, the famous B-52. 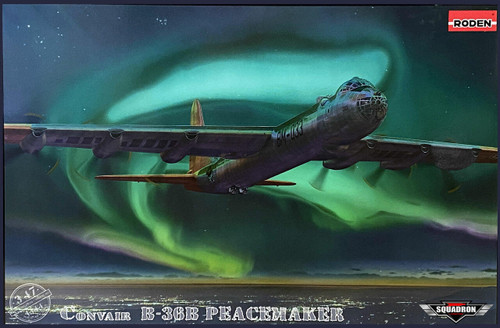