For use with any 1/700 USN Yorktown class CV and Aircraft. Changes may be required depending on the cruise modeled.

Markings for two Air Groups that served aboard CV-6 USS Enterprise in 1944 to 1945. Air Group 20 was a typical late 1944 Air Group with F6Fs, SB2Us, and TBMs. Air Group (Night) was one of two Night Fighter Groups in the USN and the first deployed. Only two aircraft were used, F6Fs and TBMs. Markings for 90 aircraft (Typical USN Air Group) include Aircraft Insignia, Buzz numbers and tail "G" Markings.

Also included are Deck markings for the Enterprise to include the deck numbers introduced in 1944. 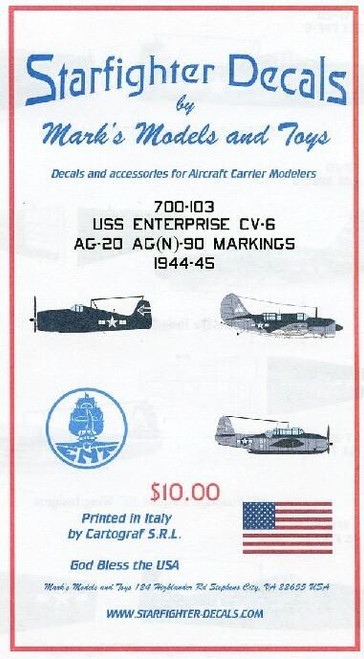