A Unique Aircraft
The Corsair was originally developed by the American company Vought in response to a February 1938 request for proposal for a carrier fighter aircraft by the U.S. Navy. Designed to surpass even land-based fighters, it featured a 2,000hp engine and massive 4-meter propeller and - most memorably - a unique inverted gull wing. This first version of the Corsair (which means "pirate") was given the nickname "birdcage" due to the large frame sections used in the canopy structure. Thrown into front line action from February 1943 onwards, the aircraft took part in the U.S. military's counter-offensive which was based in the Solomon Islands; it was mainly used by the U.S. Marine Corps and used an advantage in speed and armor over the Japanese Zero fighter to prove a valuable weapon in the arsenal of the U.S. military.

About the Model
Plastic model assembly kit of the F4U-1 Corsair. ★1/32 scale. Fuselage length: 318mm, Wingspan: 390mm. ★Features faithful recreations of fuselage, unique inverted gull wing and large propeller, and more. ★Inverted gull wing can be assembled in folded or extended position as the modeler chooses; details on the inside of the fold joint are also captured accurately. ★ Choose between up or down elevators and flaps. ★Two-part engine cowls can be removed from the model, even after completion. ★Select retracted or deployed main landing gears and tail wheel. ★Includes two figures depicting the pilot, one seated and one standing. ★Comes with 3 sets of markings to depict U.S. Navy and U.S. Marine Corps aircraft. ★The set includes a full-color, 12-page booklet detailing the history of the Corsair line of aircraft. 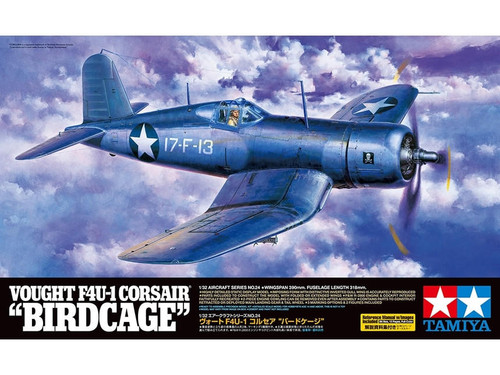