Reissue of the classic 1/120 box scale Boeing B-29. Measures 10 1/2 inches long with a 14 inch wingspan. This kit comes molded in silver with clear swivel stand and another display stand option. Updated decals for 3 versions! Built up by Bill Engar with Dauntless Dotty decals. Skill Level 2. Glue required for assembly. Officially licensed with Boeing!

Superfortress The part that the B-29 Superfortress played in the victory in the Pacific will be remembered for a long time. From the time of their first raid over Japan on June 15th 1944, until the last Atom bomb was dropped on Nagasaki August 9th 1945, the giant planes dropped 171,060 tons of bombs on their targets and flew 100 million miles in doing it. The B-29's advanced design allowed it to remain in service in various roles throughout the 1950s. The B-29 was the only aircraft that ever used nuclear weapons in combat. The B-29 had a wingspan of 141 ft 3 in, was 99 ft long, and was 27 ft 9 in high. The gross weight of the plane was 135,000 lb and it's bomb load was 10 tons. Its four, 18 cylinder Wright Cyclone engines, equipped with dual turbo-chargers were rated at 2,220 horsepower each. Cruising speed was set at 300 miles per hour, while the top speed was 375 mph. 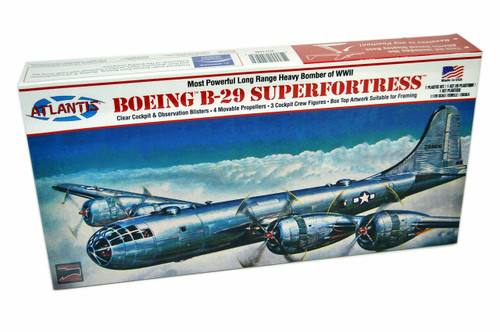