The Sturmgeschuetz (storm or assault gun) was developed in the 1936-39 period to provide armoured support for the infantry. This came about largely because the new tanks being produced were destined for the panzer (armoured) divisions. In a battlefield situation there was no guarantee that tanks from an armoured division would be available to support the infantry. Thus the idea of the assault gun regiment organic to an infantry division came about. The new assault gun developed was based on the Panzerkampfwagen III Designated Strumgeschuetze III, the assault gun had a low superstructure with its main armament mounted in the superstructure front and given limited travers. Pre-production vehicles were battle-tested in the invasion of France in May 1940, and then ordered into large scale production.

The original idea was for a vehicle able to give fire support for the infantry, but it was soon discovered that an anti-tank capability was even more important. Later models of the StuG III led to the StuG 40 in early 1942, a StuG III with either a 7.5cm Sturmkanone 40 L/43 or (later) a Sturmkanone 40 L/48. In 1943, production of the Pzkpfw III was phased out as being at the end of its development as a gun tank. Because of the great losses of tanks on the Russian front General Guderian suggested that StuG III vehicles be issued to tank divisions as they were cheaper, simpler and quicker to build than tanks. This would have created an even bigger increase in StuG III output which was already insufficient to meet demands. So it was decided in a conference with Hitler in November 1943 to use the chassis of the Panzerkampfwagen IV. The object was to use this new Strumgeschuetze IV for the panzer divisions. This would greatly simplify maintenance as the panzer divisions. This would greatly simplify maintenance as the panzer divisions were all equipped with the Panzer IV tank. A prototype was already in a month, using a superstructure from StuG III production output. As the Panzer IV chassis was 46cm longer, and 8cm lower than the StuG III it was necessary to weld in an extra forward deckplate, and superstructure side strips, to fill the gaps. On the left front of the superstructure an armoured box (with two periscopes and a hatch) was built forward to cover the driving position.

Production started in December 1943, Krupp-Gruson of Magdeburg the builders. Total production was about 1000 vehicles. StuG Ivs equipped the third battalions of some tank regiments in place of tanks. Early models were on the Pzkpfw IV Ausf H chassis but most were on the Ausf J chassis. Zimmerit anti-magnetic coating was common, and some had ferro-concrete added on the superstructure front for added protection. Crew: 4, combat weight 23 tons, top speed 24mph (road), 15mph (cross country), ammunition: 63 rds (AP 39, AP 40, HE), armour : 85mm (max) 10mm (min). Other details as PzIV. 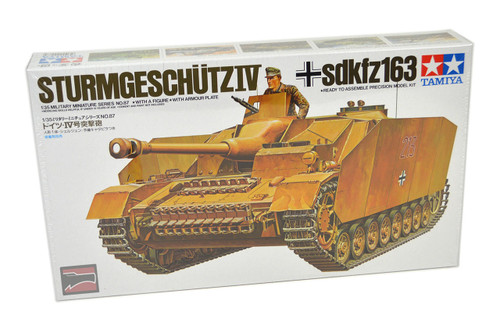