When a tank became inoperative, the Recovery Platoons were informed of the condition of both the tank and the surrounding road surface. Tanks such as Pz.Kpfw.III and Pz.Kpfw.IV could be towed by a single 18 ton heavy half-track, but heavy tanks such as the Tiger I or Panther required three or more towing vehicles. In that case, about 5m of wire rope was used to link each of the half-tracks together. Except for emergency situations, a draw-bar was used for the tank/half-track linkage instead of wire rope. After the linkage was complete, a commander and signalman boarded the lead half-track, directing the other half-tracks by a series of hand signals. (1/35 scale scene at left measures about 1m 20cm in length)

Detailed information on the finished FAMO is presented one month after the initial report of the mock-up. The FAMO was the largest half-track in the German army, and the model reflects the size and detail of this behemoth. Combine with the Panzer III, IV, Tiger I and Panther for a variety of diorama possibilities.

In the wake of Blitzkrieg advances made by the Wehrmacht at the outbreak of WWII, the recovery of damaged or broken tanks from the battlefield proved relatively simple. After securing an area, reinforcing divisions could easily send inoperative vehicles back to the homeland for repair via railway. However, in the seesaw battles with the British Army in North Africa and against the Russian Army on the Russian front, the quick replenishment of tank strength became an indispensable element of Wehrmacht battle strategy. The utilization of the 18 ton Heavy Half-Track "Famo" proved fundamental to this strategy.

The proposal for the development of the Wehrmacht half-tracks was first made in 1932. Originally, three half-tracks, designated by their towing capability (5 ton, 8 ton and 12 ton) were designed, until 1936, when a light 3 ton vehicle and a heavy 18 ton vehicle, the largest one in the Wehrmacht, were also added. The 18 ton half track was mainly developed for the towing of 21cm and 24cm artillery howitzer and of course for tank recovery. It could also be used for the transport of over 30 troops. 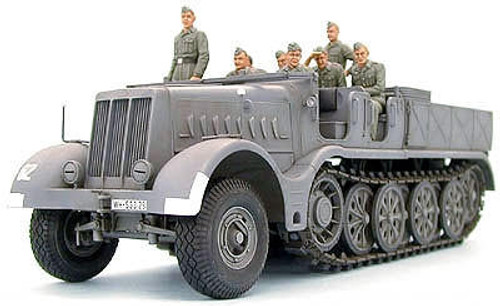