Established in 1919, the German motorcycle manufacturer DKW earned international acclaim in the thirties as a producer of finely crafted two-stroke racing motorcycles. It was at this period that the reconnaissance division of the Wehrmacht, focused on mechanization, was accelerating the deployment of motorcycles. At first, the Wehrmacht did not express an interest in the two-stroke engine produced by DKW. In 1938, however, they decide to adopt the 11hp single cylinder two-stroke engine equipped DKW NZ 350 medium cycle. In 1940, production was started on the NZ 350/1 version, specially modified for the Wehrmacht. This new model featured a cast iron engine block, centrifugal air filter, and strengthening braces from the frame to an added luggage carrier. Although it proved unsuitable for heavy cross country use, its light weight and easy handling mad it ideal as a courier cycle in Europe, North Africa and Russia well into World War II. 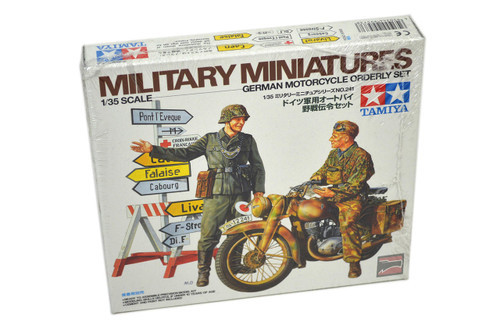