Scourge of the Skies
The Messerschmitt Bf 109 served the Luftwaffe throughout WWII. Its E-3 variant - the first true mass production Bf 109 - reached units from late 1939. Reaching speeds of up to 570km/h, it operated in the skies over Belgium and France during the German invasions. From the summer of 1940 the British skies became the main focus of air operations: the Battle of Britain. The Bf 109 E-3 engaged in countless dramatic dogfights with British counterparts such as the Hurricane and the Spitfire.

About the Model
★This is a 1/48 scale plastic model asembly kit. ★The form of the Bf 109 E-3 is captured in style, including the angular nose design. ★Features an accurate rendering of the left side bulge on the vertical fin, and separate rudder component. ★Front edge leading slats and flaps are depicted down, and the canopy can be assembled open or closed. ★Comes with a seated pilot fiture and a choice of three marking options in the box. 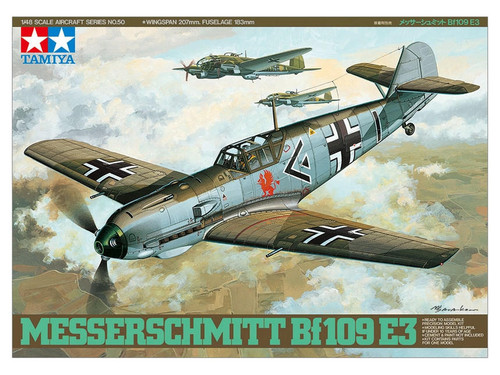