During WWII the Fieseler Fi156C was used at every front. It had the wonderful ability of taking off and landing over a short distance on both smooth and rough surfaces, and was often used for reconnaissance and liaison. This plane has been added to the 1/48 Aircraft Series as a Milestone 100th Release. When building this model many thoughts on what it must have been like to have flown in the Fieseler Fi156 may come to mind when you are working on its long canopy, broad wing span, and body. This is aimed to be a beautiful edition to its series. Additionally, famed military commanders such as Rommel frequently observed the front lines from the Fi156. A set of 6 figures including a pilot and officer are included allowing you to easily reproduce a variety of scenes such like Rommel giving instructions to a staff officer. The Storch was closely regarded by many in the German military as a fellow soldier. Other 1/48MM series can be added to build a diorama beyond genres which would be pleasurable.

This is an assembly kit of the Fieseler Fi156C Storch. ★Length 202mm, Wing Span 297mm. This model shows the Fi156C's ability to take off and land in restricted areas. ★The main wing joins the Fieseler Fi156s delicate body at the canopy which is molded to the metal main wing spar and stilt. ★A choice of 3 kinds of canopies, belly tanks, and skis for winter. From the many extra parts provided, you are able to build a Fieseler Fi156C to your own liking. ★Choice of an open or closed embarkation hatch, as well as the position of the main wings flap, up or down. ★Has 5 kinds of markings for either General Rommels embarkation plane or the Mussolini rescue plane. ★ Comes in a "Milestone 100th Release" package. 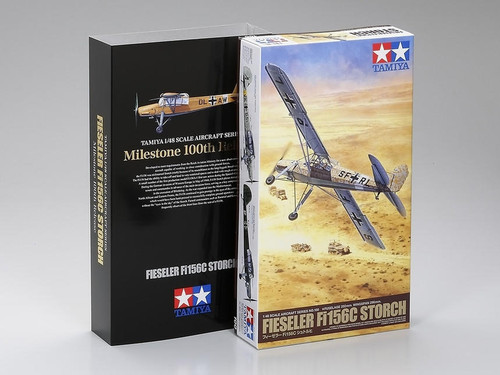