Designed around the new Pratt & Whitney 2,000HP radial engine and tuning the largest propeller ever attached to a fighter plane, the Vought F4U Corsair became a legend in its own time. The F4U-1 was the first production version of the Corsair. It had an inverted gull wing and a production version of the Corsair. It had an inverted gull wing and a framed canopy with a flat top. However may problems were found soon. For example, the port wing stall often gave the Corsair unstable landing. Anther problem was poor visibility because of its long nose and framed canopy. Therefore F4U-1A: the cockpit was raised about seven inches, the framed canopy was replaced with a semi-bubble design canopy, and the taller tail wheel strut was equipped; was introduced. F4U-1D with clear vision canopy on frameless was introduced later for more visibility. Also the F4U-1D had two pylons under the center wing section that could carry the bombs up to 1,000 ponds and the napalm. Furthermore 5 inch rockets could be carried under each wing. Therefore in1944, the F4U-1D was formally deployed as the first carrier based aircraft of Corsair series. Beginning by placing the F4U-1D as Marine squadrons VMF-124 and VMF-213 aboard the ESSEX on the way to the Phillippines, the F4U-1D was used for attacking Japan as the first operation from U.S. Navy in 1945. About 3,700 amounts of F4U-1D were produced, then it held an established position from U.S. Navy because of its ability and reliance. 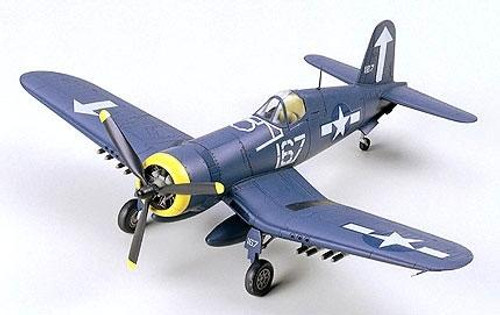